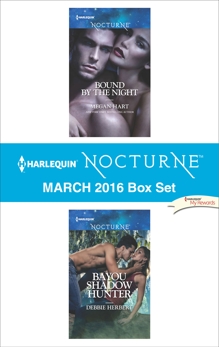 Synopsis: Do you harbor passionate otherworldly desires where the normal and paranormal collide? Let Harlequin® Nocturne bring you into dark and dangerous territory where your senses will be awakened.

BOUND BY THE NIGHT by Megan Hart

Things that go bump in the night, from the inexplicable to the irresistible… New York Times bestselling author Megan Hart captivates readers with this gripping collection of novellas.

Monica Blackship hunts down creatures that shouldn't exist. Stephanie Adams has the power to shape nocturnal visions. And if it's weird, Jase Davis is on it. They're all members of the Crew, an international consortium devoted to explaining the unexplainable. In this enthralling trilogy, these intrepid investigators face a daunting array of paranormal dangers, from deadly cryptids to dream thieves. They're ready for ghosts, monsters and other strange phenomena. But is their greatest challenge distinguishing reality from fantasy, or separating work from pleasure?

Bent on revenge, Native American Shadow Hunter Tombi Silver could turn to only one woman, the “witch” Annie Matthews, for help. Her ability to hear auras had allowed her to discover Tombi's friend mystically trapped by forces that could destroy them all. The accompanying message of a traitor in their midst meant Tombi could trust no one. Dare he bring Annie along on his quest to fight shadow spirits? Putting his faith in someone outside his tribe, especially one who pulled at his tightly controlled desires, could prove just as dangerous as his mission…

Look for 2 new paranormal stories every month from Harlequin® Nocturne!