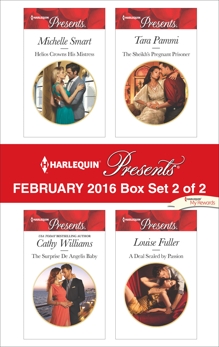 HELIOS CROWNS HIS MISTRESS The Kalliakis Crown by Michelle Smart The discovery of Crown Prince Helios's secret lover, Amy Green, threatens to shatter the kingdom of Agon. Legally, Helios must wed someone of pure royal blood…so will he do as duty commands, or risk his crown to marry his mistress?

THE SURPRISE DE ANGELIS BABY The Italian Titans by Cathy Williams Undercover to investigate the ship he plans to acquire, Daniel De Angelis is tempted by the gorgeous Delilah. Two weeks of sensual surrender later, Delilah faces a shocking truth. Daniel lied about his identity…and she's pregnant with the billionaire's baby!

THE SHEIKH'S PREGNANT PRISONER by Tara Pammi Bound by honor, Sheikh Zafir's one indulgence was his whirlwind affair with Lauren. Upon finding out she's carrying his child, Zafir imprisons Lauren in his palace. His heir will not be illegitimate, so now he must make Lauren his wife! A DEAL SEALED BY PASSION by Louise Fuller When free-spirited Flora Golding stands in the way of Massimo Sforza's latest acquisition, the tycoon plans to seduce the antagonistic beauty to get his way. Only he hadn't counted on her passion undoing all his carefully laid plans…

Be sure to collection Harlequin® Presents' December 2015 Box set 2 of 2!