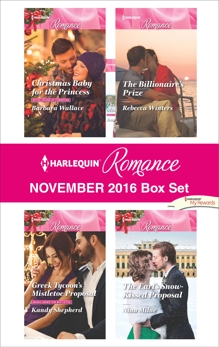 CHRISTMAS BABY FOR THE PRINCESS Royal House of Corinthiaby Barbara Wallace Pregnant Princess Arianna flees to New York, set against marrying the man who deceived her. But when she finds herself penniless, handsome restaurateur Max Brown can’t resist rescuing her! But is his mysterious new waitress here for life—or just for Christmas?

GREEK TYCOON’S MISTLETOE PROPOSAL Maids Under the Mistletoeby Kandy Shepherd When guarded billionaire Lukas Christophedes finds maid Ashleigh Murphy living in his mansion, he strikes a deal—she can stay if she acts as his girlfriend. But lines quickly start to blur, and Ashleigh starts wishing for a more heartfelt proposal…

THE BILLIONAIRE’S PRIZEby Rebecca Winters Dea Caracciolo has spent her whole life feeling inferior—and never more so than when she first met billionaire Guido Rossano. For Guido, enchanting Dea is the one who got away. When fate throws them together, Guido decides to take his prize—Dea as his wife!

THE EARL’S SNOW-KISSED PROPOSALby Nina Milne Gabriel, Earl of Wycliffe, hires historian Etta Mason to research his family tree and find him an heir! They might be spending Christmas in Vienna, but single mom Etta doesn’t believe in fairy-tale endings. Even still, she can't help but be tempted by his achingly romantic kisses…