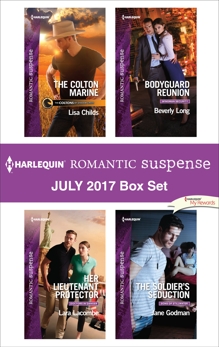 Harlequin® Romantic Suspense brings you all that and more with four new full-length titles in one collection!

THE COLTON MARINE The Coltons of Shadow Creek by Lisa Childs Ex-marine River Colton came home to heal and find out the truth about his paternity. Edith Beaulieu is supposed to be getting the Coltons’ former estate ready for its mysterious new owners when a series of accidents put her in harm’s way—and push her into River’s arms!

HER LIEUTENANT PROTECTOR Doctors in Danger by Lara Lacombe As a doctor onboard a cruise ship, Mallory Watkins didn’t think she’d be treating anything worse than seasickness and the occasional sprain. But when several patients show up with symptoms resembling radiation poisoning, she and Everest LeBeau, the ship’s sexy head of security, must work to stop a saboteur from turning the ship into a dirty bomb.

BODYGUARD REUNION Wingman Security by Beverly Long Jules Cambridge isn’t convinced the death threats she’s received are a real danger, but she agrees to a protection detail anyway. When her ex-fiancé, Royce Morgan, turns out to be her bodyguard, she’s still determined to stick it out in Vegas to find her missing half sister. But even in the desert, secrets don’t remain buried long, and these secrets might be deadly…

THE SOLDIER’S SEDUCTION Sons of Stillwater by Jane Godman Steffi Grantham is on the run, accused of a murder she didn’t commit and hiding from the man who killed her family. Her boss, Bryce Delaney, an ex-soldier with demons of his own, agrees to help her after witnessing the real killer’s attempt to kidnap her. Can both of them set aside their pasts to prove Steffi’s innoncence…and trust each other enough to fall in love?