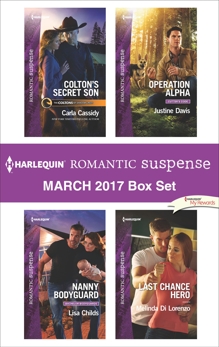 Harlequin® Romantic Suspense brings you all that and more with four new full-length titles in one collection!

After his notorious mother escapes from prison, Knox Colton is temporarily placed on leave from his job as a Texas Ranger. With nowhere else to go, he returns to his hometown of Shadow Creek, Texas, and there discovers he’s the father of a nine-year-old boy with the woman he’s never been able to forget.

Lars Ecklund is on a mission to safeguard his nephew and rescue his missing sister. He finds help in the tiny but tough Nikki Payne, a fellow bodyguard at Payne Protection Agency, who is as wary with her heart as she is good with a gun. But when faced with a sleazy adoption lawyer, assassins and a baby, they must also contend with their feelings for each other or risk losing their hearts—and lives!

When teacher Ria Connelly comes to Foxworth about a troubled student, operative Liam Burnett doesn’t know what he’s in for. But Ria refuses to back down and leave him to his lonely exsistence, even when the secrets they uncover threaten them both.

Ten years ago, Donovan Grady died in a car accident. Or so Jordynn Flannigan believed. Now he’s back from the dead, and his only goal is to keep her alive and safe from the people who forced him to fake his own death all those years before…