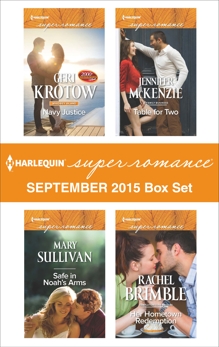 Synopsis: Harlequin® Superromance brings you four new novels for one great price, available now! Experience powerful relationships that deliver a strong emotional punch and a guaranteed happily ever after.

NAVY JUSTICE
Whidbey Island • by Geri Krotow
Joy Alexander left the navy to settle on Whidbey Island as a civilian lawyer. Former SEAL Brad Iverson joined the FBI. When he comes to Whidbey as an undercover agent, he reconnects with Joy. Working together in a life-and-death situation highlights their mutual attraction, and forces them to ask if acting on their desire is worth the risk…

SAFE IN NOAH’S ARMS
by Mary Sullivan
Monica Accord has no place harvesting vegetables—she’s never even owned a houseplant! Yet here she is on Noah Cameron’s farm serving out her community service. Sure he’s a hippie to her fashionista, and they’re complete opposites, but slowly Monica’s discovering the kind man behind Noah’s gruff , handsome exterior… and the sweetness of his embrace.

TABLE FOR TWO
A Family Business • by Jennifer McKenzie
Travis Kincaid doesn’t deserve Mallory Ford’s forgiveness. But when he runs into his ex-fiancée at her brother’s wedding—his grandmother’s ring still on her finger—he’s certain she’s the only woman for him. And if he wants another chance, he’ll have to be completely honest with Mallory…and with himself.

HER HOMETOWN REDEMPTION
Templeton Cove Stories • by Rachel Brimble
Tanya Todd is back in Templeton Cove on a mission… and it’s overwhelming. Liam Browne, her ex, is the only one she can turn to. He’s hotter than ever, and so is their attraction. But can they put the past behind them?