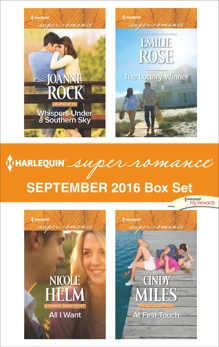 Synopsis: Harlequin® Superromance brings you a collection of four new novels, available now! Experience powerful relationships that deliver a strong emotional punch and a guaranteed happily ever after.This Superromance box set includes:#2048 WHISPERS UNDER A SOUTHERN SKYHeartache, TNby Joanne RockThe last person Amy Finley wants to see is Sam Reyes, her old flame and now Heartache's sheriff. Sam needs information to put away a stalker, and Amy can't refuse the handsome cop. But no matter what, she needs to keep her secrets…#2049 ALL I WANTA Farmers' Market Storyby Nicole HelmCharlie Wainwright doesn't make mistakes. He'd never get drunk and have a one-night stand…until he does, and Meg Carmichael gets pregnant. She wasn't part of the plan, but he has to make things right: wife, then kid. If only he could convince her.#2050 THE LOTTERY WINNERby Emilie RoseWinning the lottery ruined Jessie Martin's life. Forced to start over, she discovers strengths she hadn't known she possessed…as well as an attraction to Logan Nash. But a relationship built on half-truths can't last. Which means she's got a hard decision to make.#2051 AT FIRST TOUCHThe Malone Brothers by Cindy MilesWhen sexy boy-next-door Eric Malone tries to drag Reagan Quinn out of the misery she's been in since losing her eyesight, she at first refuses his overtures…and then she falls for him. But Eric is faced with a life-changing decision and has to find a way to align duty with desire.