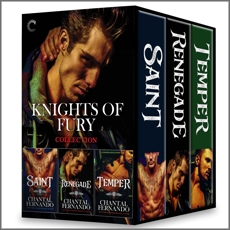 Synopsis: From the New York Times bestselling author of the Wind Dragons and Cursed Ravens MC series comes sinners, saints and secrets in the world of the Knights of Fury MC

A letter from my first kiss and my childhood everything…from prison.

I was just a kid the last time we saw each other, but the connection between us now is anything but innocent. He may be nicknamed Saint, but this sweet, sexy biker most definitely has a wild streak. Hearing from him draws me right back into the Knights of Fury motorcycle club—the people I’ll always think of as family.

He’s still the only man I’ve ever wanted.

Each good, old-fashioned letter from Saint has my heart racing. Which is nothing compared to how I feel when he surprises me in person, as a free man.

He’s the type of man who would do anything to protect his woman. And with my world crashing down around me, that’s exactly what I’m going to need.

Between wild parties and rumbling motorcycles, living next to the Knights of Fury MC has always left good girl Isabella curious. When her car breaks down and she’s got to get to Las Vegas for the birth of her sister’s baby, one of her neighbors offers her a ride. It’s too tempting to pass up, and besides, she can think of worse travel conditions than wrapping her arms around Renny, A.K.A. Renegade. Tall, dark and handsome, the man is pure sex on a Harley.

One night in Vegas cutting loose with the bikers doesn’t seem so bad. Until she wakes up the next morning. Married. To Renny.

Nothing complicates an annulment like lingering temptation, especially when Isabella and Renny give in to their need, putting their marriage where their mouths are. But as Isabella learns what outlaw life is really like, she’ll have to decide if she’s in love with a biker—or in over her head.

Every year, the hot, tatted biker comes into Abbie’s bar, orders whiskey, and asks her out. Every year, Abbie turns him down. After all, dating a man that goes by Temper seems like a really bad idea, no matter how attracted she is to him.

But this year is different. Abbie’s different. Older, wiser, and tired of being stuck behind the bar in a sleepy town. This year, she’s ready for whatever adventure the sexy but sweet biker has in store for her.

Or so she thinks…until an elegant candlelit dinner ends with a dead body.

Now, Abbie finds herself on the ride of her life, whisked away to the big city in Temper’s protective custody. She should be scared but—despite his nickname—it’s clear the last thing Temper would ever do is hurt a hair on her head. And when danger catches up with them, Abbie soon realizes that holding tight to her man while straddling a Harley may be the safest place of all.