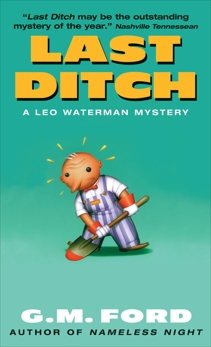 In Leo Waterman, writer G.M. Ford has created a private detective who tackles cases armed with strong survival instincts--and a deadly sense of humor. In his fifth outing, Seattle's most uncompromising sleuth finds that the laughs are all on him after making a startling discovery at home.

P.I. Leo Waterman is unflappable, irrepressible and unpredictable--a guy who, when facing adversity, would rather throw a punchline than a punch. As the son of one of Seattle's most colorful political figures, Leo Knows the city like no one else. Barely operating within the bothersome confines of the law, Leo manages to bend the rules via a dash of urbane charm, backed-up by a mild threat of mutual blackmail.

Recently, Leo has put aside the ghosts of his childhood to take up residence in his deceased parents' newly renovated mansion, which he now shares with his girlfriend, forensic specialist Rebecca Duvall. Domestic tranquility is the ideal, but this is Leo Waterman's home--where a simple chore can lead to disaster.

To clean up the neglected backyard, Leo calls upon his most trusted allies, "the Boys," a tenacious collective of hapless barflies whose pension checks arrive care of a low-rent ginmill. but as they tear down a dilapidated greenhouse, the motley wrecking crew uncovers a human skeleton that belongs to Leo's late father's most despised enemey: a muck-raking, ultra-conservative journalist who vanished twenty years ago. With the evidence stacked against "Wild Bill" Waterman, his son feels compelled to clear his name by digging up the past--and trying not to get buried beneath it.