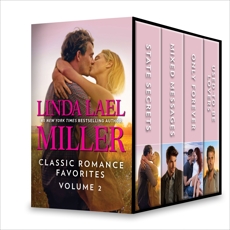 Synopsis: There’s nothing quite like love to flip a man’s world upside down… Don’t miss a single classic story in this collection from #1 New York Times bestselling author Linda Lael Miller.

Cookbook author Holly Llewellyn is the last person who should be labeled an “enemy of the state”—or is she? After all, her brother is a missing traitor, and with her ties to the president, the Secret Service isn’t taking chances. So they send in agent David Goddard, undercover. But after one glance, David knows Holly isn’t just an “assignment”—she’s a woman who’ll change his life.

Mark wasn’t sure the beautiful and spirited Carly had what it took to be a reporter, but he was sure that he wanted her. And Mark never denied himself what he wanted. Only Carly was far better at uncovering the truth than Mark had given her credit for. And sooner or later she’d uncover the most dangerous truth of all—that he couldn’t live without her.

Up-and-coming TV personality Vanessa Lawrence has learned the hard way that jocks are bad news. Her cheating ex-husband is a prime example—and now he won’t stop demanding permission to write lies about her in his tell-all memoir. So when sexy, confident athlete Nick strides into her life, she should have known he’d be nothing but trouble…

Tony Morelli had always pursued the things he wanted with single-minded tenacity and authority. It had been a very successful strategy in business, and it had been just as successful with Sharon Harrison. But when their perfect romance falls apart, it’ll take everything he has to win her back.