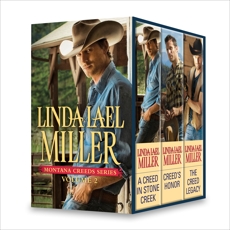 Synopsis: Meet The Creed Cowboys! Brought to you by #1 New York Times bestselling author Linda Lael Miller, the First Lady of the West.

A Creed in Stone Creek. Steven is a single attorney who becomes the guardian of an orphaned five-year-old boy and trades his big-city law firm for a ranch in Stone Creek, Arizona. When Steven takes on the pro bono defense of a local teen, he meets his match in beautiful, by-the-book prosecutor Melissa O'Ballivan.

Creed's Honor. A hardworking rancher running his uncle's place in Lonesome Bend, Colorado—that's Conner. Maybe a small-town cowboy's life isn't exactly his dream, but he owes the man who took him in as a kid. Then his estranged twin brother reenters his life—and so does a woman named Tricia McCall…

The Creed Legacy. He's a rodeo cowboy and Conner's twin. Brody is also a restless bad boy with a secret past. He's the opposite of everything Carolyn Simmons wants, but, despite that, she falls for him—and falls hard.

Three Creed men, all cowboys, all gorgeous, all yours!