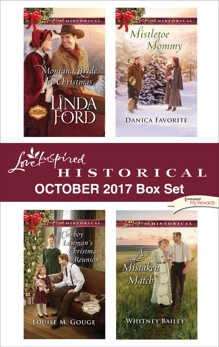 When Annie Marshall answers single father Hugh Arness’s ad for a marriage in name only, the preacher refuses—she’s too young and pretty to be happy in a loveless union. But after he agrees to Annie’s suggestion of a four-week trial period, Hugh might just realize they’re the perfect match.

After fleeing from her late husband’s cousin, who hopes to extort money from her and take her children away, Evangeline Benoit relocates to Colorado at Christmas. But will local sheriff Justice Gareau—the man whose heart she once broke—help her?

Unable to afford a nanny, widowed single father Luke Jeffries seeks a wife to care for his children. But even as a secret from mail-order bride Nellie McClain’s past puts their future together in jeopardy, can Luke and Nellie find true love in their marriage of convenience?

A MISTAKEN MATCH
by Whitney Bailey

When his mail-order bride arrives, James McCann believes there’s been a mistake—Ann Cromwell is beautiful, despite his request for a plain bride. As they wait for the matchmaking agency’s mix-up to be fixed, Ann struggles to prove she can be a good farmer’s wife after all.