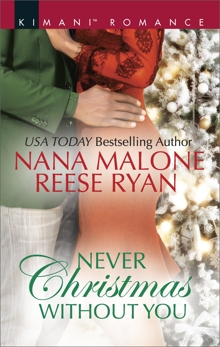 Never Christmas Without You: An Anthology

Synopsis: All you need this Christmas are these sizzling stories full of love and a touch of holiday magic…

Just for the Holidays by Nana Malone

Justin Morrison would do anything to make his ailing grandmother happy. Even if that means inventing a fake girlfriend to take home for the holidays. His best friend, Alex Winters, reluctantly agrees, but it’s not easy to keep her long-buried feelings for Justin under wraps when they’re sharing a room…a bed…a kiss. Christmas in Catalina is turning out to be hotter than anyone expected, but is theirs a love for all seasons?

His Holiday Gift by Reese Ryan

Pleasure Cove’s prodigal son just got the ultimate Christmas surprise—Madison, his five-year-old daughter he knew nothing about. Maddie’s aunt, Mikayla Mitchell, was once one of Dash Williams’s best friends…and his secret admirer. Now, seeing the sexy, ambitious lawyer with his little girl, Mikayla’s more smitten than ever. And Dash is starting to realize Mikayla’s the only one who could make his days merry and bright, and fill his nights with bliss…