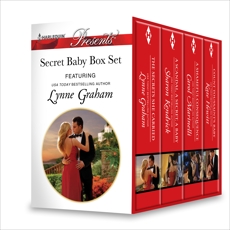 Synopsis: What happens when that nine-month secret is finally due? Find out in this fabulous box set by USA TODAY bestselling Harlequin Presents® authors!

The Secrets She Carried by Lynne Graham
Erin Turner and Cristophe Donakis have a scorching affair before he banishes her from his bed. Years later, Cristophe wants to make Erin pay back what he believes she stole… Until he's faced with her two unexpected bombshells!

A Scandal, A Secret, A Baby by Sharon Kendrick
Dante D'Arezzo is the last person songwriter Justina Perry wants to see again. Having had her heart broken once, Justina won't surrender to their insatiable attraction again. But when her pregnancy hits the front page, Dante won't rest until he has her and his heir!

A Shameful Consequence by Carol Marinelli
Nico Eliades is shocked to find a disheveled bride outside his hotel… Constantine's marriage was over before it began, and she longs to feel desired. After a white-hot night with the Greek, Constantine must confess the consequences of their passion.

Count Toussaint's Pregnant Mistress by Kate Hewitt
When French Count Jean-Luc Toussaint met beautiful pianist Abigail Summers, he had to have her in his bed! Now the unassuming starlet finds herself penniless, pregnant and waiting for the Frenchman to claim what’s his…