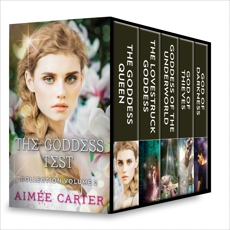 Synopsis: Dive into the thrilling THE GODDESS TEST series with these three irresistible novels by Aimée Carter.

Calliope, a.k.a. Hera, represented constancy, and yet had a husband who never matched her faithfulness. Love, loss, and longing — how does Calliope become the villain she is thought to be?

Ava, a.k.a. Aphrodite, was the goddess of love, and yet commitment was a totally different deal. Torn between two brothers, will she ever find her own heart and home?

Persephone was urged to marry one man, but longed for another. Can she find her own way to happiness?

James, a.k.a. Hermes, loves to make trouble for others. Until his quest to the mortal realm to seek answers as to why some of the gods are fading takes an unexpected turn, and he faces true loss for the first time…

His solitary existence has grown too wearisome to continue, and as one girl after another fails the Goddess Test, all seems lost. But when Henry, a.k.a. Hades — meets Kate Winters, he can’t help but hope this time will be different…