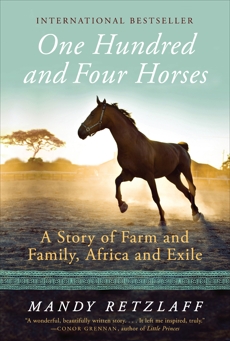 On an early summer morning in 2001, Mandy Retzlaff received the phone call that she and her family had been dreading. Her farmhouse in northern Zimbabwe was being decimated at the hands of an angry mob of Robert Mugabe’s war veterans, who had been tasked with driving white farmers from their homes. In just a few short days, forty-five of Mandy’s neighbours narrowly escaped with their lives and decided to leave Zimbabwe behind.

These families would forge a new life overseas, safe from the recriminations of Mugabe’s warmongers—yet, as they fled, they left so much behind, not least the beloved pets and farm animals to which they had devoted their lives. Mandy knew that her life, and that of her family, had changed forever. As her friend fled Zimbabwe, she had only one parting request. “We need your help,” she said. “It’s our horses. Something has got to be done about our horses.”

It was in this moment that Mandy, along with her husband, Pat, made the decision not to shrink into fear but to reach out and help. Over the following months, they rescued a group of 104 horses from the violence of the home invasions and, in one case, quite literally from the jaws of lions. As they moved across the Zimbabwean countryside, seeking ever more remote enclaves of safety for a herd of horses, it became clear: it was not just the family who were rescuing the horses, but the horses who were rescuing the family.

One Hundred and Four Horses is the story of an idyllic existence torn apart, and a story of incredible bonds—a love of the land, the strength of a family, and the connection between man and the most majestic of animals, the horse.