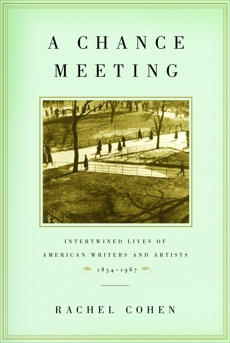 A Chance Meeting: Intertwined Lives of American Writers and Artists, 1854-1967

Synopsis: “They met in ordinary ways,” writes Rachel Cohen in her introduction, “a careful arrangement after long admiration, a friend’s casual introduction, or because they both just happened to be standing near the drinks. . . . They talked to each other for a few hours or for forty years, and later it seemed to them impossible that they could have missed each other.”

Each chapter of this inventive consideration of American culture evokes an actual meeting between two historical figures. In 1854, Henry James, as a boy, goes with his father to have a daguerreotype made by Mathew Brady and is captured in a moment of self-consciousness about being American. Brady returns to photograph Walt Whitman and, later, at City Point in the midst of the Civil War, Ulysses S. Grant. Meanwhile, Henry James begins a lasting friendship with William Dean Howells, and also meets Sarah Orne Jewett, who in turn is a mentor to Willa Cather. Mark Twain publishes Grant’s memoirs; W.E.B. Du Bois and his professor William James visit the young Helen Keller; and Edward Steichen and Alfred Stieglitz argue about photography. Later, Carl Van Vechten and Gertrude Stein, who was also a student of William James’s, attend a performance of The Rite of Spring; Hart Crane goes out on the town with Charlie Chaplin; Langston Hughes and Zora Neale Hurston write a play together; Elizabeth Bishop takes Marianne Moore, who was photographed by both Van Vechten and Richard Avedon, to the circus; Avedon and James Baldwin collaborate on a book; John Cage and Marcel Duchamp play chess; and Norman Mailer and Robert Lowell march on the Pentagon in the anti–Vietnam War demonstration of 1967. The accumulation of these pairings draws the reader into the mysterious process through which creativity has been sparked and passed on among iconoclastic American writers and artists.

Ultimately, Rachel Cohen reveals a long chain of friendship, rebellion, and influence stretching from the moment just before the Civil War through a century that had a profound effect on our own time. Drawing on a decade of research, A Chance Meeting makes its own illuminating contribution to the tradition of which Cohen writes.