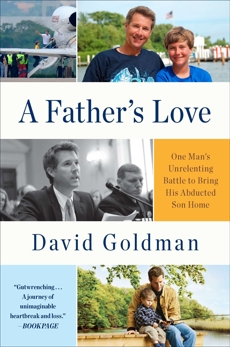 A Father's Love: One Man's Unrelenting Battle to Bring His Abducted Son Home

Synopsis: The inspiring, heart-rending story of a father's unwavering love for his son.

David Goldman and his Brazilian wife, Bruna Bianchi, led what appeared to be a happy life in New Jersey. But in June 2004, Bianchi took their four-year-old son, Sean, to Brazil for what she said would be a two- week vacation. Once there, she informed Goldman that she was staying in Brazil-and keeping Sean, setting in motion an international controversy that would eventually reach the highest levels of the U.S. and Brazilian governments. It would be almost five years before David saw Sean again.

What kept David Goldman going when everything looked so hopeless? In A Father's Love, Goldman recounts his extraordinary battle, despite overwhelming odds, to bring his abducted son back home. It is a riveting story full of peculiar ironies, unfathomable elements, threats, and legal twists and turns. Goldman describes in detail the wrenching emotions he went through and how he relentlessly rallied support behind the scenes from both high-level U.S. government officials and national media organizations. Father and son were finally reunited in December 2009, and Goldman writes about the challenges he is now facing as he works to rebuild his relationship with his son, and the advocacy work he is doing on behalf of other children in similar circumstances.

Goldman's unusual story movingly celebrates an ordinary man's incredible love for and loyalty to his son, and his ability to overcome the unimaginable to keep them together. It is a testament to how connected any father and son can be.