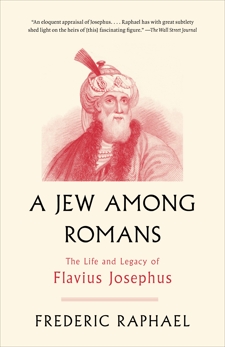 From the acclaimed biographer, screenwriter, and novelist Frederic Raphael, here is an audacious history of Josephus (37–c.100), the Jewish general turned Roman historian, whose emblematic betrayal is a touchstone for the Jew alone in the Gentile world.

Joseph ben Mattathias’s transformation into Titus Flavius Josephus, historian to the Roman emperor Vespasian, is a gripping and dramatic story. His life, in the hands of Frederic Raphael, becomes a point of departure for an appraisal of Diasporan Jews seeking a place in the dominant cultures they inhabit. Raphael brings a scholar’s rigor, a historian’s perspective, and a novelist’s imagination to this project. He goes beyond the fascinating details of Josephus’s life and his singular literary achievements to examine how Josephus has been viewed by posterity, finding in him the prototype for the un-Jewish Jew, the assimilated intellectual, and the abiding apostate: the recurrent figures in the long centuries of the Diaspora. Raphael’s insightful portraits of  Yehuda Halevi, Baruch Spinoza, Karl Kraus, Benjamin Disraeli, Ludwig Wittgenstein, and Hannah Arendt extend and illuminate the Josephean worldview Raphael so eloquently lays out.