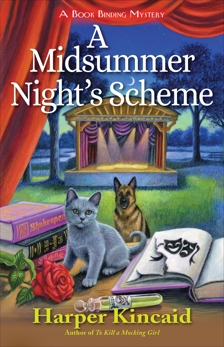 Synopsis: Perfect for fans of Jenn McKinlay and Kate Carlisle, Harper Kincaid's second installment in the Bookbinding mysteries is sure to charm.
All the world's a stage, but it may be curtains for bookbinder Quinn Victoria Caine if she can't bring the lights down on an actor's killer .

Chad Hurt is Vienna, Virginia's Local Boy Made Good. Back in the day, Chad was mostly known for breaking female hearts, but now he's a big-time Broadway actor. Now, he's back in Vienna, onstage on the Town Green, to announce the glitzy new theater he's about to build in town. But after the announcement, as he gets in his car to leave, he's killed by a sackful of snakes someone's stashed in the back seat.

Chad's only mourner is his blue Burmese kitten, Cindy Clawford. She wanders into the quaint Prose & Scones bookshop and strikes up a friendship with the resident German shepherd, Ruff Barker Ginsburg. So RBG's dog-mom, bookbinder Quinn Victoria Caine, feels compelled to search for Chad's killer.

Blood and revenge are hammering in someone's head, but whose? Is the culprit one of the scores of women done wrong? Could it be Quinn's fireman brother, Bash, who was Chad's main competitor for town Lothario? When Bash becomes a target--black widow spiders tucked into his clothes--Quinn and RBG (with Cindy riding on his back) set aside their Hamlet-esque indecision and spring into action. But the only evidence is a scrap of paper bearing a vengeful Shakespeare quote. Can Quinn track down the one who seeks a pound of flesh, or will she face the sleep of death?