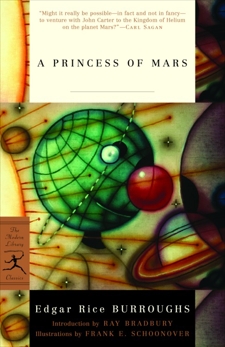 A Princess of Mars: A Barsoom Novel

Synopsis: Virginia gentleman John Carter, unexpectedly transported to the perilous red planet, Mars, finds himself captured by the loveless Green Men of Thark. As Carter struggles to win his freedom—and the affections of fellow captive Dejah Thoris, princess of the rival clan of Helium—the fate of the entire planet hangs in the balance: warring Martian tribes collide and the beleaguered Atmosphere Factory grinds to a suffocating halt. Ray Bradbury, reminiscing on the enduring thrill of Burroughs’s Martian adventure, writes, “I stood on the lawns of summer, raised my hands, and cried for Mars, like John Carter, to take me home. I flew to the Red Planet and never returned.”