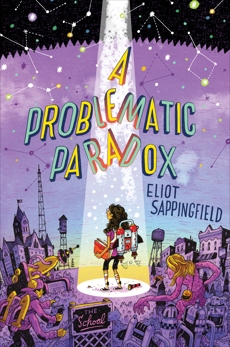 Synopsis: Guardians of the Galaxy meets The Hitchhiker's Guide to the Galaxy in this wild, warm-hearted, and hilarious sci-fi debut about a brainy young girl who is recruited for a very special boarding school.

"It's like Harry Potter, but with science instead of magic. Nikola is exactly the smart female protagonist that the sci-fi genre needs." --HelloGiggles

Nikola Kross has given up on living in harmony with classmates and exasperated teachers: she prefers dabbling in experimental chemistry to fitting in. But when her life is axially inverted by a gang of extraterrestrials who kidnap her dad and attempt to recruit her into their service, she discovers he's been keeping a world of secrets from her--including the school for geniuses where she's sent for refuge, a place where classes like Practical Quantum Mechanics are the norm and where students use wormholes to commute to class. For Nikola, the hard part isn't school, it's making friends, especially when the student body isn't (entirely) human. But the most puzzling paradox of all is Nikola herself, who has certain abilities that no one understands--abilities that put her whole school in greater danger than she could have imagined.

*"An amazing and often hilarious world that feels like a blend of A Series of Unfortunate Events and Harry Potter, but with futuristic inventions rather than magic." --School Library Connection, starred review

"Smart, energetic, and original . . . Readers will willingly jump with Nikola into the nearest wormhole and next adventure." --School Library Journal