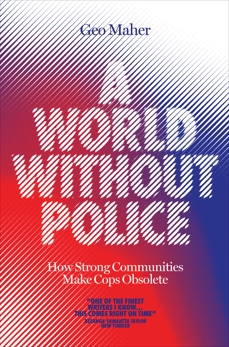 A World Without Police: How Strong Communities Make Policing Obsolete

Synopsis: A well-argued case for rolling back racism by breaking police power

Last summer tens of millions of people poured onto the streets, bringing with them a wholly new idea of public safety, common security, and the delivery of justice, communicating that vision in the fiery vernacular of riot, rebellion, and protest. A World Without Police transcribes these new ideas, written in slogans and chants, over occupied bridges and hastily assembled barricades, into a compelling, must-read manifesto for police abolition.

Fact-based and lyrically charged, A World Without Police flips what we think we know about policing on its head, and asks what safety and security might look like without the harassment, indignity, and racial terror that so routinely characterizes what we've got now. Surveying the post-protest landscape in Minneapolis, Philadelphia, and Oakland, as well as territories that have experimented with alternatives to policing at a mass scale in Latin America, Geo Maher shows what kind of institutions we can count on if we cast policing in the dust-bin of history. Told against the backdrop of this heady, exciting new movement, A World Without Police outlines how stronger communities can make cops and the systems they enforce obsolete.