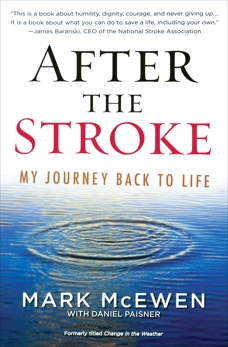 After the Stroke: My Journey Back to Life

Synopsis: The intimate, life-affirming journey of recovery and rehabilitation from a major stroke, written by one of morning television's most beloved personalities

Mark McEwen was at the top of his game and enjoying life when he suffered a stroke. After fifteen years on The Early Show, he had moved to Orlando to anchor the local news and spend more time with his family. While traveling, he experienced symptoms that led him to a hospital, where he was misdiagnosed with the flu. Two days later, on an airplane flight just hours before he finally collapsed, flight attendants and airport staff dismissed his slurred speech and heavy sweating. Misinformation not only delayed his treatment, but it also nearly cost him his life.

Now, in a candid and moving memoir, America's beloved morning-show weatherman recalls his harrowing journey of rehabilitation from a massive stroke. After the Stroke traces his recovery in the aftermath of temporarily losing some of his greatest gifts- his talent as a public speaker, and his warm, witty exuberance-while his wife worked valiantly to care for their children as well as her seriously ill husband. Sharing an ultimately triumphant story, McEwen emerges as one of our most dynamic new crusaders for stroke victims and their families.