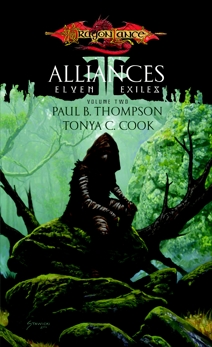 Publisher: Wizards of the Coast Publishing

Synopsis: While the Elven Exiles struggle for survival in the distant kingdom of Khur, the elves remaining in Qualinesti face persecution, enslavement, and extermination. Amid great suffering and unrelieved evil, a rebel leader–masked, anonymous, and with strange powers–appears, determined to cleanse the land of invaders.

Meanwhile, Kerianseray, the Lioness, Kagonesti general and wife of Speaker Gilthas, finds herself magically transported from certain death in Khur to equally dire straits in her former homeland. As Gilthas leads the elves across the trackless desert in search of a new home, the Lioness fights ruthless slavers and crosses paths with the mysterious masked revolutionary of Qualinesti.