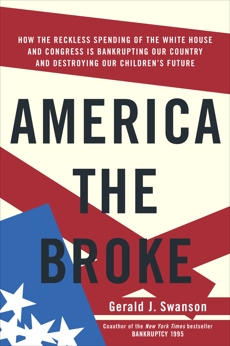 The dirty little secret that neither George W. Bush nor Congress are willing to confront—that America’s reckless spending, disastrous deficits, and exploding debt are speeding our great nation to financial ruin.

Imagine a world in which you lose your job because your company goes under, your retirement money disappears, the value of your home tumbles overnight, your bank stops allowing cash withdrawals, and your ATM card is canceled. The price of groceries has risen so fast that you don’t have the money to pay for them at the check-out counter . . . and the country is bankrupt.

That is exactly the future that economist Gerald J. Swanson sees America hurtling toward—unless we rein in our country’s reckless spending. In America the Broke, Swanson, coauthor of the runaway New York Times bestseller Bankruptcy 1995, argues that the United States is on the brink of financial collapse. Thanks to George W. Bush’s two tax cuts, the White House and Congress’ escalation of domestic spending, two wars, and an economic recession, what was a $200 billion annual surplus three years ago under Bill Clinton has become a river of red ink. The White House’s official projected deficit for 2004 is $521 billion—the largest deficit in U.S. history. With a national debt spiraling upward of $7.3 trillion, a huge trade deficit, and personal debt at an all-time high, we are standing at the edge of a financial abyss that could undermine the financial security of our families and our children’s children.

“Deficits don’t matter,” claim Vice President Dick Cheney and other members of the Bush Administration. But the facts revealed in America the Broke paint an alarming picture.

Next year’s projected deficit will exceed the amount all our cities spend on police, fire protection, medical care, and every other civil service in an entire year. It is more than we could save from abolishing Medicare and Medicaid completely.
The real deficit—the deficit the government doesn’t want you to know about—including the hidden funds we “borrow” from Social Security is nearly $1 trillion.
Rising interest rates alone could trigger staggering payments on our skyrocketing debt, soaking up every dollar the government takes in, leaving America bankrupt.

What does this mean for you and me? If the dollar goes into free fall, banks could close, businesses go bankrupt, real estate values crumble, and middle-class families could lose everything they own.

But there is hope. We can save ourselves—if we demand that our political leaders act now to eliminate the deficit and reduce the debt. In a year of deficit denial, America the Broke is a critical wake-up call regarding our government’s reckless deficit spending—as well as a blueprint for rescuing our economy and saving our country