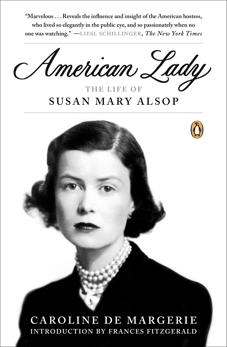 Synopsis: The fascinating story of one of the grand dames of Georgetown society and a true Washington insider

Henry Kissinger once remarked that more agreements were concluded in the living room of Susan Mary Alsop than in the White House. A descendent of Founding Father John Jay, Susan Mary was an American aristocrat whose first marriage gave her full access to post-war diplomatic social life in Paris. There, her circle of friends included Winston Churchill, Isaiah Berlin, Evelyn Waugh, and Christian Dior, among other luminaries, and she had a passionate love affair with British ambassador Duff Cooper. During the golden years of John F. Kennedy’s presidency—after she had married the powerful journalist Joe Alsop—her Washington home was a gathering place for everyone of importance, including Katharine Graham, Robert McNamara, and Henry Kissinger. Dubbed “the second lady of Camelot,” she hosted dinner parties that were the epitome of political power and social arrival, bringing together the movers and shakers not just of the United States, but of the world. Featuring an introduction by Susan Mary Alsop’s goddaughter Frances FitzGerald, American Lady is a fascinating chronicle of a woman who witnessed, as Nancy Mitford once said, “history on the boil.”