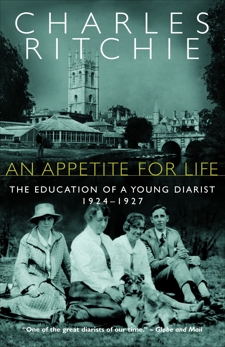 Synopsis: Charles Ritchie’s first volume of diaries, The Siren Years, created a sensation when it was published in 1974. Besides winning the Governor General’s Award for Non-fiction, it was hailed by reviewers on both sides of the Atlantic. An Appetite for Life, his second volume, first published in 1977, deals with his youth in Halifax and his career at Oxford—the years when Charles Ritchie turned from a callow, blundering youth into a callow, blundering young man.

As these diaries show, Charles Ritchie had a sharp eye, a keen ear, a highly developed sense of the absurd, and—despite his unhappy knack of landing flat on his face —a thorough “appetite for life.”

This is not only a hilariously funny book, but it presents a vivid picture of two worlds—Halifax and Oxford in the mid-twenties—that are now long gone. It also introduces us to an astonishing range of characters, but the most astonishing of all is the young Charles Ritchie himself.