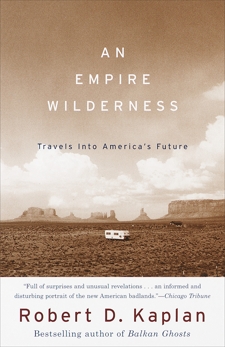 Synopsis: Having reported on some of the world's most violent, least understood regions in his bestsellers Balkan Ghosts and The Ends of the Earth, Robert Kaplan now returns to his native land, the United States of America. Traveling, like Tocqueville and John Gunther before him, through a political and cultural landscape in transition, Kaplan reveals a nation shedding a familiar identity as it assumes a radically new one.
An Empire Wilderness opens in Fort Leavenworth, Kansas, where the first white settlers moved into Indian country and where Manifest Destiny was born. In a world whose future conflicts can barely be imagined, it is also the place where the army trains its men to fight the next war. "A nostalgic view of the United States is deliberately cultivated here," Kaplan writes, "as if to bind the uncertain future to a reliable past."
From Fort Leavenworth, Kaplan travels west to the great cities of the heartland--to St. Louis, once a glorious shipping center expected to outshine imperial Rome and now touted, with its desolate inner city and miles of suburban gated communities, as "the most average American city." Kaplan continues west to Omaha; down through California; north from Mexico, across Arizona, New Mexico, and Texas; up to Montana and Canada, and back through Oregon.
He visits Mexican border settlements and dust-blown county sheriffs' offices, Indian reservations and nuclear bomb plants, cattle ranches in the Oklahoma Panhandle, glacier-mantled forests in the Pacific Northwest, swanky postsuburban sprawls and grim bus terminals, and comes, at last, to the great battlefield at Vicksburg, Mississippi, where an earlier generation of Americans gave their lives for their vision of an American future. But what, if anything, he asks, will today's Americans fight and die for?
At Vicksburg Kaplan contemplates the new America through which he has just traveled--an America of sharply polarized communities that draws its population from pools of talent far beyond its borders; an America where the distance between winners and losers grows exponentially as corporations assume gov-ernment functions and the wealthy find themselves more closely linked to their business associates in India and China than to their poorer neighbors a few miles away; an America where old loyalties and allegiances are vanishing and new ones are only beginning to emerge. The new America he found is in the pages of this book. Kaplan gives a precise and chilling vision of how the most successful nation the world has ever known is entering the final, and highly uncertain, phase of its history.