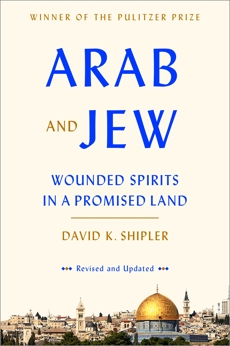 Arab and Jew: Wounded Spirits in a Promised Land

Synopsis: The expanded and updated edition of David Shipler's Pulitzer Prize-winning book that examines the relationship, past and present, between Arabs and Jews

In this monumental work, extensively researched and more relevant than ever, David Shipler delves into the origins of the prejudices that exist between Jews and Arabs that have been intensified by war, terrorism, and nationalism.

Focusing on the diverse cultures that exist side by side in Israel and Israeli-controlled territories, Shipler examines the process of indoctrination that begins in schools; he discusses the far-ranging effects of socioeconomic differences, historical conflicts between Islam and Judaism, attitudes about the Holocaust, and much more. And he writes of the people: the Arab woman in love with a Jew, the retired Israeli military officer, the Palestinian guerrilla, the handsome actor whose father is Arab and whose mother is Jewish.

For Shipler, and for all who read this book, their stories and hundreds of others reflect not only the reality of "wounded spirits" but also a glimmer of hope for eventual coexistence in the Promised Land.