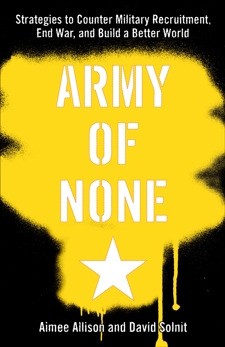 Army of None: Strategies to Counter Military Recruitment, End War, and Build a Better World

Synopsis: Uniformed U.S. Army Officers lunch with students in elementary school cafeterias. Army training programs including rifle and pistol instruction replace physical education in middle schools. Like never before, military recruiters are entering the halls of U.S. schools with unchecked access in an attempt to bolster a military in crisis.
However, even as these destructive efforts to militarize youth accelerate, so do the creative and powerful efforts of students, community members, and veterans to challenge them. Today, the counter recruitment movement—from counseling to poetry slams to citywide lobbying efforts—has become one of the most practical ways to tangibly resist U.S. policy that cuts funding for education and social programs while promoting war and occupation. Without enough soldiers, the U.S. cannot sustain its empire.
Army of None exposes the real story behind the military-recruitment complex, and offers guides, tools, and resources for education and action, and people power strategies to win.