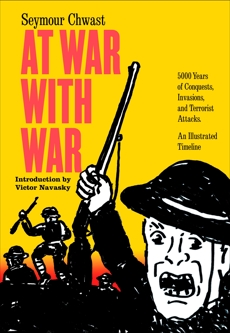 At War with War: 5000 Years of Conquests, Invasions, and Terrorist Attacks, An Illustrated Timeline

Synopsis: At War with War visualizes humanity's 5,000-year-long state of conflict, chaos, and violence on a continuous timeline. Seventy pages of stark black-and-white pen-and-ink drawings and woodcuts illustrate history's most notorious battles -- from 3300 BCE to the present day. Interspersed are contemplations on war from historic thinkers, including excerpts from "The Art of War" by Sun Tsu, "The Complaint of Peace" by Desiderius Erasmus, and "The State" by Randolph Bourne. Searing and sardonic, balancing anger and despair with wit and humanity, these raw illustrations follow in the tradition of great social satirists such as Honoré Daumier, Frans Masereel, Felix Vallotton, and Otto Dix.
Seymour Chwast is a design legend. As co-founder with Milton Glaser of Push Pin Studios, he led a revolution in graphic design in the 1960s and '70s, producing bold, vibrant work that pushed the limits of nearly every visual medium.Now, he turns his pen and sketchpad toward creating a new book on a subject that has been a personal obsession for nearly six decades: the fight against war, humankind's never-ending scourge.