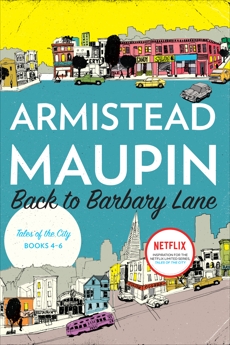 Back to Barbary Lane: "Tales of the City" Books 4-6

By turns hilarious and heartbreaking, Armistead Maupin's bestselling Tales of the City novels—the fourth, fifth and sixth of which are collected in this second omnibus volume—stand as an incomparable blend of great storytelling and incisive social commentary on American culture from the seventies through the first two decades of the new millennium.

“Tearing through [the tales] one after the other, as I did, allows instant gratification; it also lets you appreciate how masterfully they're constructed. No matter what Maupin writes next, he can look back on the rare achievement of having built a little world and made it run.”—Walter Kendrick, Village Voice Literary Supplement

Armistead Maupin's uproarious and moving Tales of the City novels have earned a unique niche in American literature and are considered indelible documents of cultural change from the seventies through the first two decades of the new millennium.  The nine classic comedies, some of which originally appeared as serials in San Francisco newspapers, have won Maupin critical acclaim around the world and enthralled legions of devoted fans.

Back to Barbary Lane comprises the second omnibus of the series—Babycakes (1984), Significant Others (1987), and Sure of You (1989)—continuing the saga of the tenants, past and present, of Mrs. Madrigal's beloved apartment house on Russian Hill. While the first trilogy celebrated the carefree excesses of the seventies, this volume tracks its hapless, all-too-human cast across the eighties—a decade troubled by plague, deceit, and overweening ambition.

Like its companion volumes, 28 Barbary Lane and Goodbye, Barbary Lane, Back to Barbary Lane is distinguished by what The Guardian of London has called "some of the sharpest and most speakable dialogue you are ever likely to read."