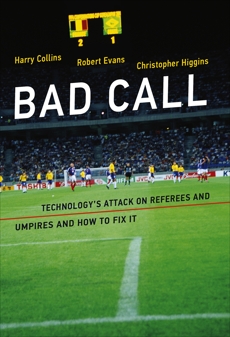 Bad Call: Technology's Attack on Referees and Umpires and How to Fix It

Synopsis: How technologies can get it wrong in sports, and what the consequences are—referees undermined, fans heartbroken, and the illusion of perfect accuracy maintained.

Good call or bad call, referees and umpires have always had the final say in sports. Bad calls are more visible: plays are televised backward and forward and in slow motion. New technologies—the Hawk-Eye system used in tennis and cricket, for example, and the goal-line technology used in English football—introduced to correct bad calls sometimes get it right and sometimes get it wrong, but always undermine the authority of referees and umpires. Bad Call looks at the technologies used to make refereeing decisions in sports, analyzes them in action, and explains the consequences.

Used well, technologies can help referees reach the right decision and deliver justice for fans: a fair match in which the best team wins. Used poorly, however, decision-making technologies pass off statements of probability as perfect accuracy and perpetuate a mythology of infallibility. The authors re-analyze three seasons of play in English Premier League football, and discover that goal line technology was irrelevant; so many crucial wrong decisions were made that different teams should have won the Premiership, advanced to the Champions League, and been relegated. Simple video replay could have prevented most of these bad calls. (Major League baseball learned this lesson, introducing expanded replay after a bad call cost Detroit Tigers pitcher Armando Galarraga a perfect game.)

What matters in sports is not computer-generated projections of ball position but what is seen by the human eye—reconciling what the sports fan sees and what the game official sees.