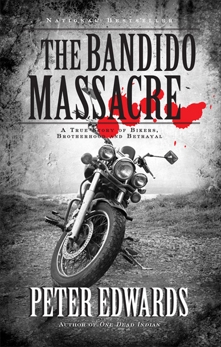 On the morning of April 8, 2006, residents of the hamlet of Shedden, Ontario, woke up to the news that the bloodied bodies of eight bikers from the Bandidos gang had been found dead on a local farm. The massacre made headlines around the world, and the shocking news brought a grim light to an otherwise quiet corner of the province. Six Bandidos would eventually be convicted of the first-degree murder of their biker brothers.

Like other outlaw bikers, Bandidos portray themselves as motorcycle aficionados who are systematically misunderstood and abused by police, as well as feared by the public. We now know the Bandidos were anything but simple motorcycle enthusiasts. However, unlike such biker gangs as the Hells Angels, who run sophisticated criminal empires, the Bandidos were highly disorganized and prone to petty infighting, and even engaged in sabotaging fellow members. This is the story of how the Bandidos self-destructed over one dark night.

As gripping as any crime novel, The Bandido Massacre takes us inside a crumbling brotherhood bent on self-obliteration and betrayal.