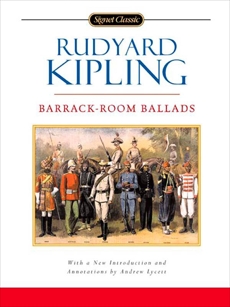 Synopsis: Barrack-Room Ballads (1892) brought Rudyard Kipling instant success and established him as a “friend of the soldier.” At the time, British men generally enlisted to escape dire poverty, and the common soldier was held in low regard by the Victorian public—until he was needed to fight. Kipling had great compassion for the British soldier and chose to celebrate him while criticizing the Empire for its treatment of its fighting men. Told in the London Cockney dialect, Barrack-Room Ballads provided the public with a more insightful, sympathetic view of its soldiers. Featuring such famous poems as Tommy, Danny Deever, Fuzzy-Wuzzy, Mandalay, and the immortal Gunga Din, Barrack-Room Ballads eloquently demonstrates Kipling’s reputation as the poet laureate of the British Empire.

With anintroduction and annotations by Andrew Lycett