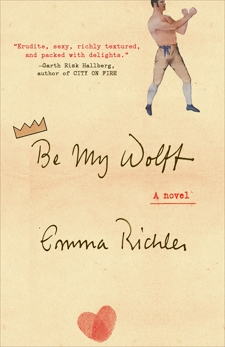 Be My Wolff: A novel

Synopsis: A nimble, extraordinarily moving novel about a sister and adopted brother with a one-of-a-kind connection

Zachariah and Rachel Wolff are brother and sister. Well, not exactly. They are star-crossed lovers. Well, not exactly. Rachel is the cherished daughter born to a Russian family living in London, and Zachariah is her parents' adopted son, who arrived from the orphanage with one sweater, a head of rambunctious curls, and a dexterous set of fists, or fives, as he likes to call them. As children, they were as close as two people could be. But when they crossed this forbidden line, there was no going back. Now, as an adult, coping with Zach's estrangement from their formidable father, Rachel is determined to invent a family history for her beloved. And so the novel cartwheels through Zach's imagined ancestry--from a tavern-educated boxer in Dickensian times to a Hussar at the Battle of Borodino during the Napoleonic Wars. All the while, Zach and Rachel's troubles in the present are building to a new point of no return. Filled with art and science, fairy tales and folk songs, tsars and foundlings, epic battles in the prize ring and on the Eastern Front, Be My Wolff is a novel of astonishing range and imagination: a love story, an exuberant adventure through time and place, a tale of our most unbreakable bonds.