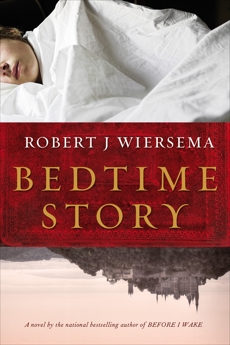 Following his bestselling debut, Before I Wake, Robert J. Wiersema returns with this exquisitely plotted blend of supernatural thriller and domestic drama.

For novelist Christopher Knox, getting up early every morning to write isn’t bringing him the sense of fulfillment it once did. It’s been ten years since his first novel was published, to some acclaim, and he’s hit a wall in trying to write his next. His marriage to Jacqui isn’t doing much better, and it’s been months since he’s slept anywhere but his office above the detached garage.

The part of Chris’s life that is going well, and brings him easy joy, is his relationship with his eleven-year-old son, David. While Chris may not make it to all of his son’s ball games, their nightly ritual of reading together at bedtime not only helps David overcome his struggles with reading, but is a calm within the storm for them both, when their days are so full of challenges. And what better way for a novelist to connect with his child than through their mutual love of books, and a bedtime story routine as unwavering as Chris’s love for his son.

When Chris comes across a book by one of his favourite childhood authors in a local used bookstore, he knows it will be the perfect gift for David’s birthday. To the Four Directions is not one Chris has read before, but he knows that Lazarus Took’s adventurous, magical stories of young heroes and other realms would be just the thing for David, as they were for him. David is less than thrilled to receive a book he’s never heard of before, however – he’d been hoping for The Lord of the Rings – and Jacqui is quick to see it as yet another sign of Chris’s detachment from David’s life.

But once they start reading the novel together, David is completely enthralled, to the extent that he truly cannot put the book down. The story, of a young peasant boy who is plucked from his home by castle guards and sent on a quest for a mysterious Sunstone, makes David feel like he is right there, in the action. Even after his parents have to take the book away from him, he can’t help but sneak it back to his room. As David is reading alone that night, he suffers an inexplicable seizure and falls into a state of unconsciousness. Doctors perform a barrage of tests, but cannot determine what’s wrong. And as David’s seizure recurs every night, his father learns that only one thing will calm it: being read to from his strange new book.

True to his nature, as someone with an inherent belief in the power of words, Chris becomes convinced that the secret of David’s collapse lies within the pages of To the Four Directions. After failed attempts to find out more about Lazarus Took from his estate, Chris traverses the continent in search of the truth. Meanwhile, David wakes up within the story he has been reading – as the boy he has been reading about – and finds himself facing perils unimaginable, in a world that he soon realizes was created to capture the hearts and souls of children like him. Because he’s not alone as he takes over the hunt for the Sunstone, but accompanied by those boys who have come before him. And as the quests of father and son lead them toward a fateful collision of worlds, David realizes that while he’s not the first to fall victim to the book’s horrific spell, perhaps he can prove himself strong enough to be the last.