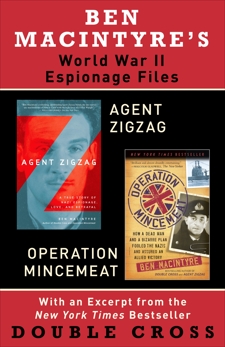 Synopsis: Agent Zigzag and Operation Mincemeat, two thrilling accounts of World War II espionage, are available together as an ebook—with an excerpt from the New York Times bestseller Double Cross.

Eddie Chapman was a charming criminal, a con man, and a philanderer. He was also one of the most remarkable double agents Britain has ever produced. Inside the traitor was a man of loyalty; inside the villain was a hero. The problem for Chapman, his spymasters, and his lovers was to know where one persona ended and the other began. Based on recently declassified files, Agent Zigzag tells Chapman’s full story for the first time. It’s a gripping tale of loyalty, love, treachery, espionage, and the thin and shifting line between fidelity and betrayal.

Near the end of World War II, two British naval officers came up with a brilliant and slightly mad scheme to mislead the Nazi armies about where the Allies would attack southern Europe. To carry out the plan, they would have to rely on the most unlikely of secret agents: a dead man. Ben Macintyre’s dazzling, critically acclaimed bestseller chronicles the extraordinary story of what happened after British officials planted this dead body—outfitted in a British military uniform with a briefcase containing false intelligence documents—in Nazi territory, and how this secret mission fooled Hitler into changing military positioning, paving the way for the Allies to overtake the Nazis.