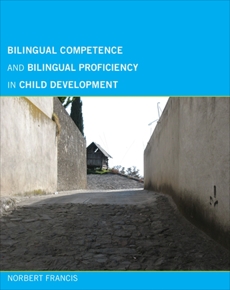 Synopsis: A study of first and second language development in an indigenous community with implications for broader linguistic and cognitive issues.

When two or more languages are part of a child's world, we are presented with a rich opportunity to learn something about language in general and about how the mind works. In this book, Norbert Francis examines the development of bilingual proficiency and the different kinds of competence that come together in making up its component parts. In particular, he explores problems of language ability when children use two languages for tasks related to schooling, especially in learning how to read and write. He considers both broader research issues and findings from an ongoing investigation of child bilingualism in an indigenous language–speaking community in Mexico. This special sociolinguistic context allows for a unique perspective on some of the central themes of bilingualism research today, including the distinction between competence and proficiency, modularity, and the Poverty of Stimulus problem.

Francis proposes that competence (knowledge) should be considered as an integral component of proficiency (ability) rather than something separate and apart, arguing that this approach allows for a more inclusive assessment of research findings from diverse fields of study. The bilingual indigenous language project illustrates how the concepts of modularity and the competence-proficiency distinction in particular might be applied to problems of language learning and literacy.

Few investigations of indigenous language and culture approach bilingual research problems from a cognitive science perspective. By suggesting connections to broader cognitive and linguistic issues, Francis points the way to further research along these lines.