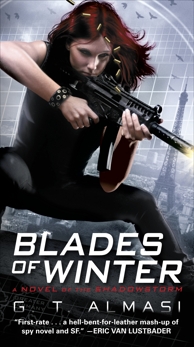 Blades of Winter: A Novel of the Shadowstorm

Synopsis: In one of the most exciting debuts in years, G. T. Almasi has fused the intricate cat-and-mouse games of a John le Carré novel with the brash style of comic book superheroes to create a kick-ass alternate history that reimagines the Cold War as a clash of spies with biological, chemical, and technological enhancements.

Nineteen-year-old Alix Nico, a self-described “million-dollar murder machine,” is a rising star in ExOps, a covert-action agency that aggressively shields the United States from its three great enemies: the Soviet Union, Greater Germany, and the Nationalist Republic of China. Rather than risk another all-out war, the four superpowers have poured their resources into creating superspies known as Levels.

Alix is one of the hottest young American Levels. That’s no surprise: Her dad was America’s top Level before he was captured and killed eight years ago. But when an impulsive decision explodes—literally—in her face, Alix uncovers a conspiracy that pushes her to her limits and could upset the global balance of power forever.

Look for all of G. T. Almasi’s riveting Shadowstorm novels:
BLADES OF WINTER | HAMMER OF ANGELS | TALON OF SCORPIO