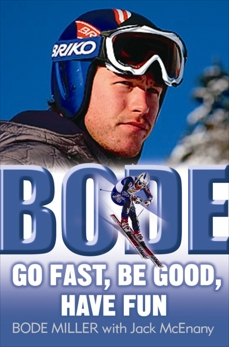 Synopsis: “I don’t master the mountain, I master speed.” Coming from Bode Miller, this isn’t boasting, it’s just the way he lives: fast, honest, and wide open. In this candid book, the two-time Olympic medalist and champion skier shares his story, the secret of his success, and his philosophy of life.

Born and raised “off the grid”–without electricity or indoor plumbing–in the cabin built by his father in the woods near Franconia, New Hampshire (pop. 850), Bode is unconventional to the core. The strong values of his simple upbringing, where he and his family had to “invent, grow, or carry in” all the essentials have made Bode unique among today’s top sports stars.
Bode’s approach to life is straightforward: “Get a plan, stick to it, and trust your instincts . . . and almost anything is possible.”

And practically since birth, the iconoclastic Bode has been achieving the impossible and laying down tracks for others to follow. He revolutionized his sport by adopting new and crossover technologies, such as “shape” skis. He drives his tradition-bound European rivals to distraction, skiing and winning by instinct. His outsider status, killer smile, and outspoken yet laid-back persona have earned him a reputation as the Michael Jordan of skiing. Men’s Journal named Bode the second greatest athlete in the world. And in the 2005 season, Bode may have moved up a notch by becoming the first American to win the Overall World Cup Alpine championship in twenty-two years.


In short, he is the kind of person everybody wants to know and hang out with. In a book loaded with insight, good humor, and eye-opening stories about the world of competitive skiing, Bode, as always, holds nothing back.