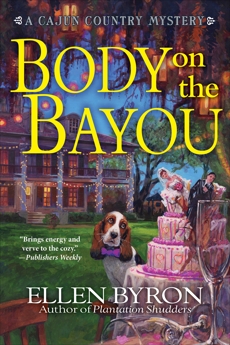 Body on the Bayou

Synopsis: Winner of the 2016 Best Humorous Mystery Lefty Award and shortlisted for the Agatha Best Contemporary Novel Award, Body on the Bayou finds Maggie Crozat once again using her artist's eye to spot clues and help.

The Crozats feared that past murders at Crozat Plantation B&B might spell the death of their beloved estate, but they've managed to survive the scandal. Now there's a trés bigger story in Pelican, Louisiana: the upcoming nuptials between Maggie Crozat's nemesis, Police Chief Rufus Durand, and her co-worker, Vanessa Fleer.

When everyone else refuses the job of being Vanessa's Maid of Honor, Maggie reluctantly takes up the title and finds herself tasked with a long list of duties—the most important of which is entertaining Vanessa's cousin, Ginger Fleer-Starke. But just days before the wedding, Ginger's lifeless body is found on the bayou and the Pelican PD, as well as the Crozats, have another murder mystery on their hands.

There's a gumbo-potful of suspects, including an ex-Marine with PTSD, an annoying local newspaper reporter, and Vanessa's own sparkplug of a mother. But when it looks like the investigation is zeroing in on Vanessa as the prime suspect, Maggie reluctantly adds keeping the bride-to-be out of jail to her list of Maid of Honor responsibilities in Body on the Bayou, Ellen Byron's funny and engaging follow up to her critically acclaimed novel Plantation Shudders.