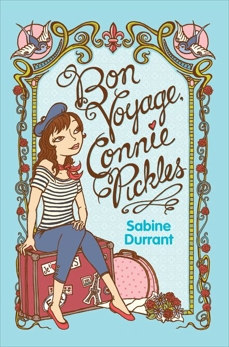 Here is the sidesplitting diary of Connie Pickles, age fifteen, on her way to Paris for a school exchange program. She has glamorously big plans to reunite her long-lost French grandparents with her mother, get over a crush on her best friend, William, and make herself très chic. But nothing seems to be going right! It's just Connie's luck to end up on the wrong train, get stuck living with an angry Goth girl who enjoys making her miserable, and wind up with a horrible haircut. Connie's trip to Paris is turning out to be quel désastre!

But plucky Connie isn't going to give up so easily. Through candid and hilarious diary entries in this sequel to Cross Your Heart, Connie Pickles, you can't help but root for Connie as she navigates her way through each wacky, often touching adventure—with only her friends, her sense of humor, and her limited French vocabulary to guide her.