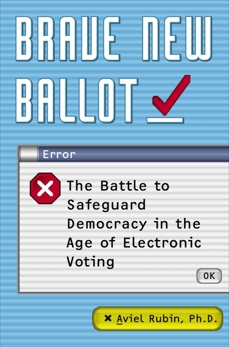 Brave New Ballot: The Battle to Safeguard Democracy in the Age of Electronic Voting

Synopsis: Democracy has never been more vulnerable.
The problem is right here in America.

How to Sabotage an Election

Program every fifth vote to automatically record for your candidate

Avi Rubin, a computer scientist at Johns Hopkins and a specialist in systems security knows something the rest of us don’t. Maybe we suspected it, maybe we’ve thought it, but we didn’t have proof.

The electronic voting machines being used in 37 states are vulnerable to tampering, and because the manufacturers are not required to reveal—even to the government—how they operate, voters will never know if their votes are recorded accurately.

Follow Rubin on his quest to wake America up to the fact that the irregularities in the 2004 elections might not have been accidents; that there are simple solutions that election commissions are willfully ignoring; that if you voted on an electronic machine, there’s a chance you didn’t vote the way you wanted to.

Learn what you can do the next time you vote to make sure that your vote is counted.

Imagine for a moment that you live in a country where nobody is sure how most of the votes are counted, and there’s no reliable record for performing a recount. Imagine that machines count the votes, but nobody knows how they work. Now imagine if somebody found out that the machines were vulnerable to attack, but the agencies that operate them won’t take the steps to make them safe. If you live in America, you don’t need to imagine anything. This is the reality of electronic voting in our country.

Avi Rubin is a computer scientist at Johns Hopkins University and a specialist in systems security. He and a team of researchers studied the code that operates the machines now used in 37 states and discovered the following terrifying facts:

The companies hired to test the election equipment for federal certification did not study the code that operates the machines and the election commissions employed no computer security analysts.

All votes are recorded on a single removable card similar to the one in a digital camera. There is no way to determine if the card or the code that operates the machine has been tampered with.

It’s very easy to program a machine to change votes. There’s no way to determine if that has happened.

There were enough irregularities with the electronic voting machines used throughout the 2004 election to make anyone think twice about using them again.


Avi Rubin has testified at Congressional hearings trying to alert the government that it has put our democracy at risk by relying so heavily on voting machines without taking the proper precautions. As he has waged this battle, he has been attacked, undermined, and defamed by a prominent manufacturer. His job has been threatened, but he won’t give up until every citizen understands that at this moment, our democracy hangs in the balance.

There are simple solutions and, before you vote in the next election, Rubin wants you to know your rights. If you don’t know them and you use an electronic voting machine, you may not be voting at all.