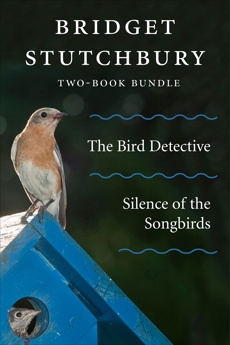 Bridget Stutchbury Two-Book Bundle: Silence of the Songbirds and The Bird Detective

A Yale-educated professor of biology, Bridget Stutchbury roams forests studying the social lives and sexual antics of birds, sharing with us the curious reasons for their strange behaviour, bright colouring and elaborate songs.

Migratory songbirds are disappearing at a frightening rate. By some estimates, we may have already lost almost half of the songbirds that filled the skies only 40 years ago. In Silence of the Songbirds, Bridget Stutchbury follows the birds on their 10,000-kilometre migratory journey and looks at the factors most threatening their extinction, from pesticides to the destruction of vital habitat; from the bright lights and structures of our cities to climate change. We may well wake up in the near future and hear no songbirds singing.

In The Bird Detective, author Bridget Stutchbury explains why some birds readily “divorce,” why parents don’t treat their sons and daughters equally, why females sneak in quick sex with neighbouring males and why some adults forgo breeding altogether. Stutchbury writes about the territorial nature of birds and describes their nesting habits, revealing why some species prefer to live in over-crowded groups. Perhaps most important, she illuminates how climate change and other pressures of the modern world are forcing birds to change their habits as they fight for their very survival.