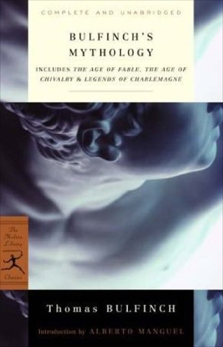 Bulfinch's Mythology: Includes The Age of Fable, The Age of Chivalry & Legends of Charlemagne

Synopsis: For almost a century and a half, Bulfinch's Mythology has been the text by which the great tales of the gods and goddesses, Greek and Roman antiquity, Scandinavian, Celtic, and Oriental fables and myths, and the age of chivalry have been known. The forerunner of such interpreters as Edith Hamilton and Robert Graves, Thomas Bulfinch wanted to make these stories available to the general reader. A series of private notes to himself grew into one of the single most useful and concise guides to literature and mythology.

The stories are divided into three sections: The Age of Fable or Stories of Gods and Heroes (first published in 1855); The Age of Chivalry (1858), which contains King Arthur and His Knights, The Mabinogeon, and The Knights of English History; and The Legends of Charlemagne or The Romance of the Middle Ages (1863). For the Greek myths, Bulfinch drew on Ovid and Virgil, and for the sagas of the north, from Mallet's Northern Antiquities. provides lively versions of the myths of Zeus and Hera, Venus and Adonis, Daphne and Apollo, and their cohorts on Mount Olympus; the love story of Pygmalion and Galatea; the legends of the Trojan War and the epic wanderings of Ulysses and Aeneas; the joys of Valhalla and the furies of Thor; and the tales of Beowulf and Robin Hood.