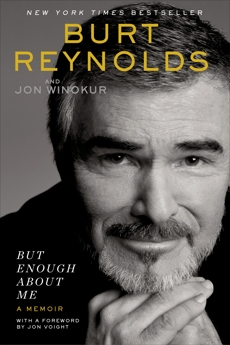 Burt Reynolds was a Hollywood leading man known for his legendary performances, sex symbol status, and infamous Hollywood romances. In his decades of stardom, Reynolds saw it all. But Enough About Me will, in his words, “call out the assholes,” try to make amends for “being the asshole myself on too many occasions,” and pay homage to the superstars and ordinary heroes he came to love and respect.

Beginning with Reynolds’s adolescence as a notable football player in South Florida and the devastating car accident that ended his sports career and helped steer him toward acting, But Enough About Me then chronicles Reynolds’s meteoric rise to fame. From Oscar nominations, to the spread in Cosmopolitan magazine, to the financial decisions that took him from rich to poor and back again, Reynolds shares the wisdom that came from his many highs and lows.

He also opens up about his romances and breakups with some of Hollywood’s leading women, including the “two loves of his life,” Dinah Shore and Sally Field, and his turbulent relationship with Loni Anderson, to whom he was forced to pay record-setting amounts of alimony and child support after the couple divorced. Through it all, Reynolds reflects on his personal pitfalls and recoveries and focuses on his legacy as a father and acting teacher.