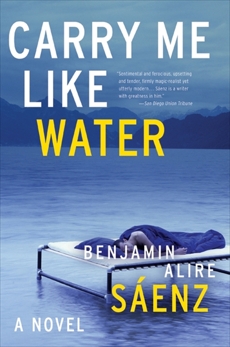 "Sentimental and ferocious, upsetting and tender, firmly magic-realist yet utterly modern. . . Sáenz is a writer with greatness in him." —San Diego Union Tribune

With Carry Me Like Water, Benjamin Alire Sáenz unfolds a beautiful story about hope and forgiveness, unexpected reunions, an expanded definition of family, and, ultimately, what happens when the disparate worlds of pain and privilege collide.

Diego, a deaf-mute, is barely surviving on the border in El Paso, Texas. Diego's sister, Helen, who lives with her husband in the posh suburbs of San Francisco, long ago abandoned both her brother and her El Paso roots. Helen's best friend, Lizzie, a nurse in an AIDS ward, begins to uncover her own buried past after a mystical encounter with a patient.

This immensely moving novel confronts divisions of race, gender, and class, fusing together the stories of people who come to recognize one another from former lives they didn't know existed— or that they tried to forget.