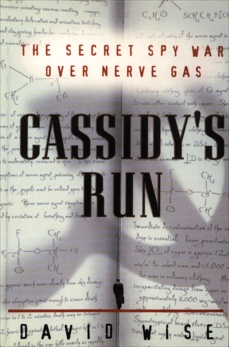 Synopsis:
Cassidy's Run is the riveting story of one of the best-kept secrets of the Cold War—an espionage operation mounted by Washington against the Soviet Union that ran for twenty-three years. At the highest levels of the government, its code name was Operation shocker.

Lured by a double agent working for the United States, ten Russian spies, including a professor at the University of Minnesota, his wife, and a classic "sleeper" spy in New York City, were sent by Moscow to penetrate America's secrets. Two FBI agents were killed, and secret formulas were passed to the Russians in a dangerous ploy that could have spurred Moscow to create the world's most powerful nerve gas.

Cassidy's Run tells this extraordinary true story for the first time, following a trail that leads from Washington to Moscow, with detours to Florida, Minnesota, and Mexico. Based on documents secret until now and scores of interviews in the United States and Russia, the book reveals that:

¸         more than 4,500 pages of classified documents, including U.S. nerve gas formulas, were passed to the Soviet Union in exchange for hundreds of thousands of dollars

¸         an "Armageddon code," a telephone call to a number in New York City, was to alert the sleeper spy to an impending nuclear attack—a warning he would transmit to the Soviets by radio signal from atop a rock in Central Park

More than a cloak-and-dagger tale, Cassidy's Run is the spellbinding story of one ordinary man, Sergeant Joe Cassidy, not trained as a spy, who suddenly found himself the FBI's secret weapon in a dangerous clandestine war.

"Cassidy's Run shows, once again, that few writers know the ins and outs of the spy game like David Wise. . . his research is meticulous in this true story of espionage that reads like a thriller."
—Dan Rather

"The Master hsa done it again. David Wise, the best observer and chronicler of spies there is, has told another gripping story. This one comes from the cold war combat over nerve gas and is spookier than ever because it's all true."
—Jim Lehrer